Against Church Meetings During COVID-19 Outbreak 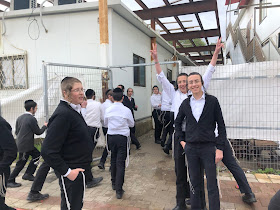 "We're not scared!" - Flaunting the mandates from the Israeli government, some Ultra-Orthodox Jews have refused to close synagogues and shuls like this one in Ramat Beit Shemesh despite the COVID-19 worldwide plague. Courtesy AZ Jewish Post.

I'm seeing religious friends complain about the new government restrictions on worship services due to COVID-19 outbreak. Even some dear friends of mine whom I otherwise admire and respect are encouraging their congregants to send letters to government leaders, pressuring them to exempt churches and synagogues from the new restrictions.

Friends, don't listen to them.

Meeting at churches and synagogues during the outbreak is utter madness. Foolish and wild-eyed as snake-handling preachers.


And by the way, if you're a religious person of any stripe -- Jew, Christian, Muslim, anyone -- and you are insisting on communal events in a time when those events are a serious danger to human life, you are involved in what Jews call hillul Hashem, or desecration of God's name.
— Ben Shapiro (@benshapiro) April 1, 2020


Yes, government infringing on our freedom of religion and freedom to assemble is almost always bad. But now it's doing a world of good: slowing the spread of disease and literally saving people's lives.

>> "We should just have faith and not fear!"


Should we also "just have faith" if we jump off a cliff? After all, "He will command His angels concerning you, to guard you wherever you may go."

The ridiculous snake-handling preachers say, "just have faith". After all, the Bible says, "You will tread upon the lion and the cobra, and trample the serpent's head."

These kind of ultra-literalist interpretations of the Bible are terribly misinformed and bring shame to God's reputation. These cherry-picking fools conveniently omit stories like Miryam, who was isolated from the people (and the Tabernacle!) when she had an infectious disease...at God's behest, no less!

Meeting in churches during the outbreak brings shame on God's name. Consider the recent reports that France's outbreak is traced to a church meeting in which one person infected the 2500 congregants. When the secular world reads that, do you think they are grateful to God that we had "had faith and not fear"? Of course not! They're going to read that and be angry that foolish religious people kickstarted France's 60,000 infections and 5,000 deaths. That brings shame on God's reputation.


Just the other week, Israel's first death from coronavirus was a precious Holocaust survivor.


Aryeh Even, 88-year-old #Holocaust survivor, is named to be Israel’s first #coronavirus fatality. Born in Hungary, he had 4 children, 18 grandchildren, and a great-grandchild. https://t.co/54Gdiw6vHr
— Auschwitz Memorial (@AuschwitzMuseum) March 21, 2020


Closer to home, Marty Blume, my good friend who helped me create Chavah Messianic Radio, died from coronavirus last week. It's real, friends, and it's dangerous.


Some people thought that initially, but we've been proved wrong.

By all appearances, coronavirus is the once-in-a-century plague that experts warned us could happen. It's far worse than the flu.

>> "It only affects the elderly"


Students of the Bible would do well to remember the divine command to honor the elderly:

Rise in the presence of the aged, show respect for the elderly and revere your God. I am the LORD.
-Lev 19

Dismissing coronavirus because it only affects old people runs contrary to God's ideal.

And it's worth noting that while coronavirus disproportionately affects the elderly and immuno-compromised, it can still infect (and kill) young and healthy people. One notable example: a group of Florida college students who partied on spring break, thinking they were safe, are now infected.